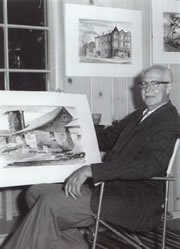 Along with having a sense for the strong artistic talent comes also having a strong sense of protecting and enriching that talent.

Francis Howe Hardy was a businessman, an amateur painter, and a summer resident in Ephraim from 1930 until his death in 1960. It was his ambition to create in Door County a climate of understanding and appreciation of the arts, which would attract both artists and art lovers to the area. To this end, he encouraged annual well-presented exhibits of artwork and as a charter member of the Peninsula Arts Association, he was instrumental in setting up an annual PAA exhibit. He worked tirelessly to influence the arts in Door County. In recognition of his efforts the PAA named their gallery at the Anderson Dock, the Francis Hardy Gallery.

Fairly late in life, Hardy began painting as a hobby and discovered a true talent. After a time of frustration with his efforts, he arranged to take painting lessons during several winters in Florida. His resulting watercolors reveal his talents. He enjoyed painting Door County scenery, especially detailed barns, landscapes, and seascapes. Some of his life's work reflected domestic life in Door County. Due to time constraints his output was limited, but a few Midwesterners are fortunate enough to have one of his paintings in their collections. 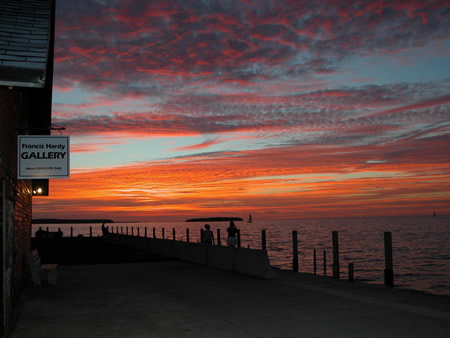 Francis, with the help of his wife Helen, inexhaustibly shaped Door County's art community. They made significant financial contributions and gave many hours of volunteer time to different cultural projects. They will forever be remembered for their positive influence on the arts in the Door County community.